On Thursday February 1, at the auditorium of Liceo Scientifico Da Vinci in Trento the second meeting before the fourth-year students’ departure to Serbia took place. The floor was led by Enrico Milano, professor of International Law at the University of Verona, who introduced the international relations of Serbia, especially with Kosovo and the EU. Professor Milano illustrated a general overview of the dialogue between the capital cities of Serbia and Kosovo, Belgrade and Pristina, with the mediation of the European Union.

After a brief digression about the main international events that involved Serbia, the lecturer highlighted the difficulties in the Serbia-Kosovo relations during the 90s and the consequent armed conflict. In addition, the mechanisms of the UN international legislation were illustrated, from the beginning to its end in 2008, when Kosovo declared its independence. As other Balkan countries, Serbia is following the path towards the European Union. The lack of recognition of Kosovo independence by Belgrade is one of the most important key points in the EU integration process, where Brussels acts as mediator between the two countries. 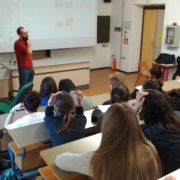